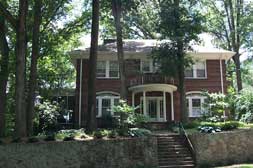 Another area developing during the early 1900s was the East Park Avenue neighborhood. In 1910 part of the W.C. Cleveland estate was subdivided for residential homes. Cleveland, a former mayor and member of the South Carolina House of Representatives, bequeathed some of his land, just south of East Park Avenue, as a city park in 1887. This was to become McPherson Park.

The District is significant architecturally because of its many good examples of early 20th century residential architecture. The Craftsman, American Foursquare, Tudor, and Neo-Classical styles are most notable.

The district is significant in community development because of its association with W.C. Cleveland. An early developer and public minded citizen, he bequeathed a large area of land south of the neighborhood for a public park, McPherson Park. East Park Avenue was subdivided about 1910, and reached its height of development from 1920 through the 1930s.

The East Park Avenue neighborhood received its Historic-Architectural Overlay Zoning protection in 1989 and was listed on the National Register of Historic Places in October 2005. The city's oldest public park, McPherson, is located on the southern boundary of the district and provides a buffer between the neighborhood and the downtown Central Business District.